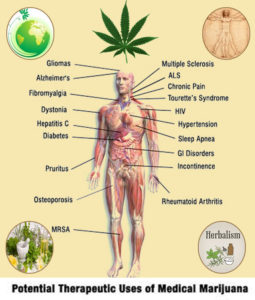 The primary effects of marijuana are seen on the nervous system and brain. An individual will experience a dulling of the senses, decreased memory and concentrations, and behavioral changes. The feeling of pain is dulled and the appetite is stimulated. Side effects on the nervous system can result in slow reaction times and loss of coordination.
Cannabinoids and THC also affect the cardiovascular system. 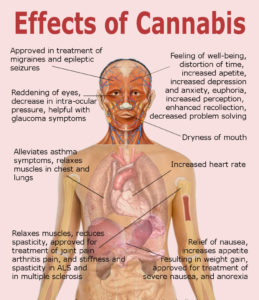 The heart can beat faster and blood pressure may decrease. Patients my experience dizziness and increased sensitivity. A marijuana plant contains hundreds of chemical compounds that may affect the defense system in the lungs. The cilia, small microscopic extensions in the lungs that reject foreign toxins, may be prevented from working optimally under smoking conditions. This places smokers at high risk of developing chronic lung conditions, infections, and cancer.

After the cessation of marijuana, withdrawal systems may appear in as little as a week. This is rare and the majority of users do not become physically dependent. Withdrawal symptoms may include increased irritation, insomnia, sudden mood changes, and depression. Patients can refrain from using drugs at least 3 weeks every 4 months to allow the body to recognize the side effects of marijuana.